Traditionally, Studenchishte Marsh was considered part of Lake Ohrid and therefore few studies concentrate on the area specifically. Nonetheless, as realization of the importance of the wetland grows, more and more literature is appearing.

Proposed measures for restoration of Studenchishte Wetland (Montagud and Apostolova, 2018) was presented at the 2018 meeting of the Society of Wetland Scientists Europe Chapter. It maps the loss of marsh habitat that has taken place over the past 40 years at Lake Ohrid’s north-east corner and prescribes specific steps to reverse the process.

Studenchishte Marsh as an Integral Part of Ancient Lake Ohrid is the first English-language paper to concentrate on the last remains of Lake Ohrid’s vital wetland. With Ohrid SOS’s Nadezda Apostolova as the lead author, it appeared in Wetland Science and Practice. 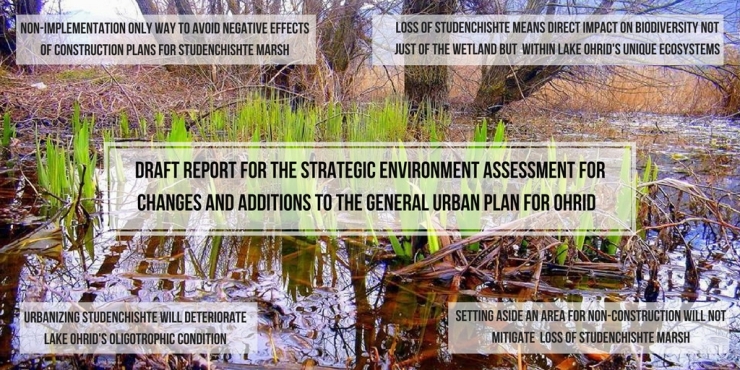 A team led by Dr. Borka Kovachevic conducted an official environmental assessment of the proposed changes to the General Urban Plan for Ohrid, which contains the plans for drainage and construction at Studenchishte Marsh. The assessment outlines the severe negative effects to biodiversity and water quality that would result from such action. (Macedonian)

Spirovska et al’s study forms a scientific basis for the movement to protect Lake Ohrid’s Studenchishte Marsh, revealing key elements of its biodiversity and functioning. It outlines both the boundaries and justification for establishment of the area as a Monument of Nature. (Macedonian-language only)

This site uses Akismet to reduce spam. Learn how your comment data is processed.