6 MAY 2018: From mayoral and institutional statements advocating a science-based approach to management of the Ohrid region to the Ohrid Declaration on Wetland Protection,  the Society of Wetland Scientists’ (SWS) conference in Ohrid, Macedonia has felt like a watershed moment in the movement to secure healthy habitats, clearer waters, sunbeams that still swim 21 meters deep, marshy fragments of floral memories, and species that no lake other than Ohrid has ever seen before.

Amid all this excitement and some little hope, two slides presented by the University of Valencia’s Daniel Montagud capture the essence, atmosphere and potential legacy of the conference like no others.

The first, above, shows the progressive destruction of Studenchishte Marsh that has taken place over the past 30 years and more. Little by little, the wetland’s extent has been chipped away, leaving it an ever smaller surface in which to preserve its special species and perform its services to the lake and people of Ohrid.

Alongside the threat to destroy the area entirely, such deterioration has been a key motivational factor that has recently focused SWS’s attention on the Ohrid region and in turn influenced its decision to host its annual conference right next to threatened Studenchishte this year. 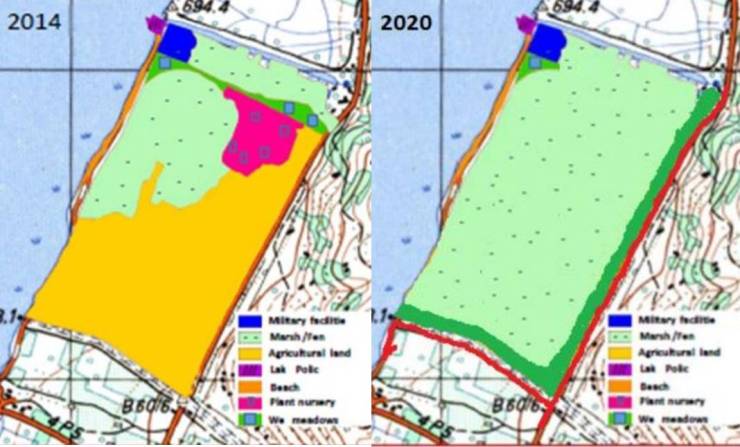 Inspiringly, the second slide speaks a sunnier story. It reveals how, with measures such as reconnecting water channels between Studenchishte and Lake Ohrid; removing debris; gently re-wetting agricultural areas; and establishing a buffer zone, Studenchishte Marsh can be transformed back into the kind of nature haven that would be the envy of any future-thinking city.

We could then look forward to little living miracles like the return of nesting birds and the renaissance of regionally rare plants, while the enhanced communication between wetland and lake would bring back breeding grounds for fish to revitalize Ohrid stocks. Powerfully, an entirely new tourism product would also emerge to compliment the numerous natural wonders with which UNESCO Ohrid-Prespa can wow its visitors.

And that is the essence of the Society of Wetland Scientists 2018 conference. It’s not most deeply about what Ohrid and Maceconia have lost; it’s more about what they now have to gain…

Slides republished with author permission from Proposed Measures for Restoration of Studenchishte Wetland, a presentation by Daniel Montagud to the 13th Society of Wetland Scientists Europe Chapter Meeting.